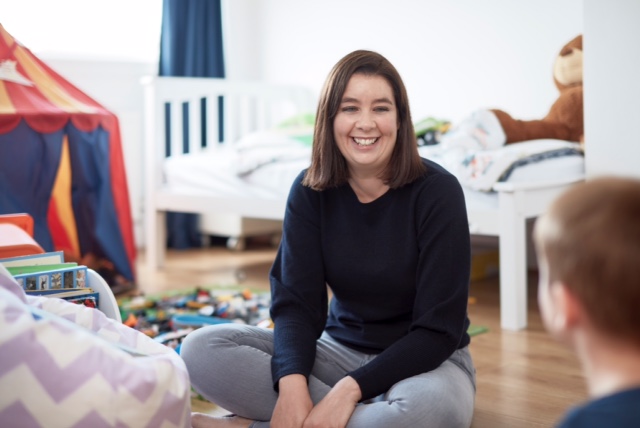 I’ve wanted to do a blog post on my friend and fellow therapist Liz Thompson, ever since I first met her and now we’ve finally gotten around to it!  Liz runs Fresh Thinking Therapy, and specialises in working with children and young people.   I love her enthusiasm for her work and her personal commitment to improving the lives of young people.  In this Q&A session Liz talks about everything from ‘dark’ psychology and horror, to strong women and her amazing ‘bag of wonder’ ….

EF: What was your journey to becoming a CBT therapist?

Liz: All my life I have been a bit of a psychology nerd I think!  When I was ten me and my friend, used to get paranormal psychology books out from the library, we were interested in all the weird things that can happen to humans like spontaneous combustion and the supernatural, ghosts and stuff.

Liz: Yeah, we used to freak each other out all the time.  So it went from that to wanting to be a forensic scientist, then wanting to be Cracker, then I wanted to be a Hollywood therapist – so yes, all my life that theme has been there.

EF: It sounds like you’ve really been influenced by therapists in the media which is really interesting in itself.  So how did you get started?

Liz: When I was 18 I started off my career in psychology working on forensic units so I’ve done a lot of the darker side of humanity there, working with problems like psychosis, and personality disorders, I was there for about 5 years.

Liz: Yes, I loved it, that’s what I wanted to be doing and I had the energy then.  But then I kind of hit a point where I though ‘ok I’m going to have to change now because I can’t do this forever’, I wasn’t going anywhere and I’m quite ambitious.  I’d lost interest and I needed to do something else, so I became an A-level psychology teacher!

EF: That ties in with your drive to help people, and to see people progress and develop doesn’t it?

Liz: Yes totally, and unfortunately I didn’t see much progression for the people on the secure unit. So then the 10 years I spent as a teacher and working with kids made me realise that I love helping people.  I’m so much more into the story of the child and how they are as a person, rather than what I can teach them.  I liked getting to know them and support them, seeing them grow as human beings.

EF: ‘Growing as human beings’ that’s nice.  So, I guess that during your time as a teacher you saw students who were struggling with things and maybe that impacted their studies?

Liz: Yes, all the time.  I was always surrounded by male teachers, and quite authoritarian traditional characters, so I was seen as this fluffy, cuddly, soft teacher who wanted to help so they let me take on that role within the college.  I did anti-bullying campaigns, peer mentoring and all sorts.

EF: That sounds nice that actually those two sides of you, that interest in the psychology, darker side of things, coupled with that interest in children and helping people to develop and grow has come together.

Liz: Yes, I started working for ChildLine whilst I was a teacher, I loved that.  I did my Level 2 Counselling too.  A career change takes a lot of hard work but it’s totally worth it.  I love doing my private work now.

EF: So, what kind of issues, and problems are children and young people typically coming to you with now?

Liz: I see a lot of social anxiety and depression.  However a lot of the children that I see are very angry, they’ve got lots of behavioural issues, and often severe school refusal – so they’re anxious around school and are bottling things up, holding it in and exploding at home, or they’ve just got to the point where they can’t face going into school anymore.  Separation anxiety ties in with that, as well as low self-esteem.  I also see a lot of anxiety associated with ADHD or autism as they may struggle to communicate, and read other people.

EF: It sounds like a common theme that children are battling with these days, is knowing how to express their emotions and it’s tough because as far as I know no-one teaches you about emotions.

Liz: No and they’re still getting told to ‘pull themselves together’ and ‘carry on’, that’s still commonly used, I hear that all the time.  I guess a lot of their anxieties are also seen as ‘naughty behaviours’.  So people are reacting to them and getting annoyed and frustrated back.

EF: So it becomes a negative cycle for them?

Liz: Yes, and many schools are great but sometimes schools ways of dealing with these behaviours is to punish, and it’s not just the schools, its the local authorities who are telling kids they ‘have to go to school otherwise mummies going to get sent to jail’.

EF: and all that pressure just makes it worse.

Liz: Absolutely.  So those are the main areas that are coming up at the moment.

EF: And where do you tend to see the young people that you work with, do you have a clinic which you rent?

Liz: Yes, I have a room at a clinic in Ormskirk, however there are some children who just can’t even get out of the house at the moment so I do home visits too Skype – but that doesn’t seem too popular for some reason.

EF: Ah, you thought you were being all modern and cool but it didn’t work out did it?!

EF: So, it’s more often the parents who are getting in touch and asking for your help.

Liz: Yes, and I think the key thing there is that only if your son or daughter is ok about coming  will it work because otherwise they will put up a complete barrier and it’s a waste of time – it’s not good for them.

EF: No, they’ve got to be in the right place to be able to engage in it haven’t they.

Liz: Yes, and also you can’t build trust with someone who has been forced to be in a situation they don’t want to be in.

EF: Absolutely, it’s just going to be uncomfortable for them.

Liz: Yes, and they’ll never get any help if they have associated that horrible feeling with someone trying to help, it’s not good.

EF: So, that must be a difficult part of your job sometimes, just trying to form that relationship with children and young people in the first place, how do you do it?

Liz: I have Top Trumps in my handbag!  It’s funny, you know I went to see a kid the other day and they said “Liz, you’ve got a bag of wonder!”

Liz: Yes, it helps to take the focus off, instead of like laser focus on what they are saying, just playing a game and then throwing in the odd question can help.  It’s not for everyone though, some kids don’t want to play and will put barriers up there too.

EF: So, that’s interesting, as you are playing the game you might just start to say “So, what’s happening at school at the moment”

Liz: Yes, something along those lines.  This one I’ve got here is Football themed, so I might say “Do you think players ever get angry?  How do they manage it?”

EF: I like that, that’s interesting.  So, onto my next question, what would you say has been your proudest moment?

Liz: It’s those times when I’ve helped children who have been really struggling at school and they have gone on to receive awards, I really like that.   Some of them have shared their awards with me on FaceBook and it’s like a regular thing now.  The schools have turned it around, so instead of punishment, they’re rewarding the children and giving them responsibilities and they’ve shone.  It’s really lovely, I can think of a few children like that.

EF: What about on a more personal level, what kind of things do you do to look after yourself?

Liz: I think it’s simply a case of focusing on my interests.  For example, when times were hard after I’d had my son, I took up sewing, and that’s my flow, if I’ve got lots of anxious thoughts in my head and I start sewing the concentration of that and the reward I get back from it really helps, it gives me a break for a while.  I also love anything related to flying, space and rockets. I like to go to Manchester Airport and watching the planes taking off.   I like to read too, when I have time.

EF: Final question – can you name five people, dead or alive, real or fictional that you would invite to a dinner party?

Liz:  I like this question and have given it a lot of thought ahead of today.  My friend Bernie was brilliant, she died a couple of years ago, but I will always live by ‘what would Bernie do?’ She was amazing, such a free spirit.  Tim Peake, I choose him because I think he’s the bravest person that I know of, to get up in a rocket and to go into the unknown, he seems lovely too.  David Attenborough – everyone loves him don’t they?  Mary Portis and Mo Mowlam, I realise that I like strong women!

EF: It sounds like you’re a strong woman too, to have braved a career change and to make such a difference to the lives of children and young people.  It’s been a pleasure speaking with you today – thank you.